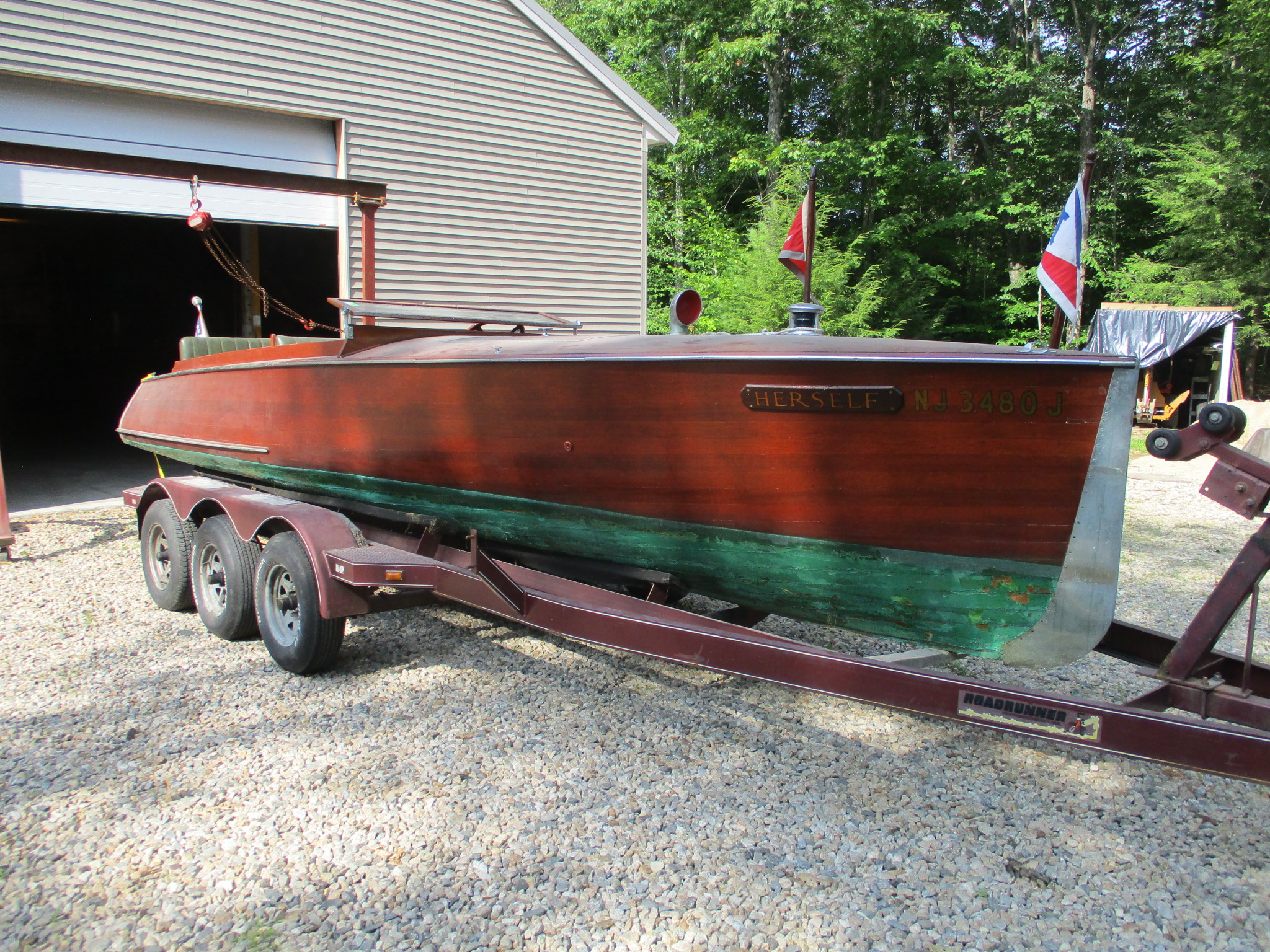 1926 24' Fay Bowen purchased by the Shipman Family in 1926 and boathouse kept on Lake Hopatcong N.J. Original Launch with Fay Bowen LN42 engine that is out of the boat and now powered by a Chrysler PC that moves the Launch along nicely. Solid straight Launch with great patina. 2 Owner boat since new and last run in 2018. No trailer but possible local transport. Herself is one of few Fay Bowen's with Mahogany topsides and was known throughout the Northeast at many shows over the years. 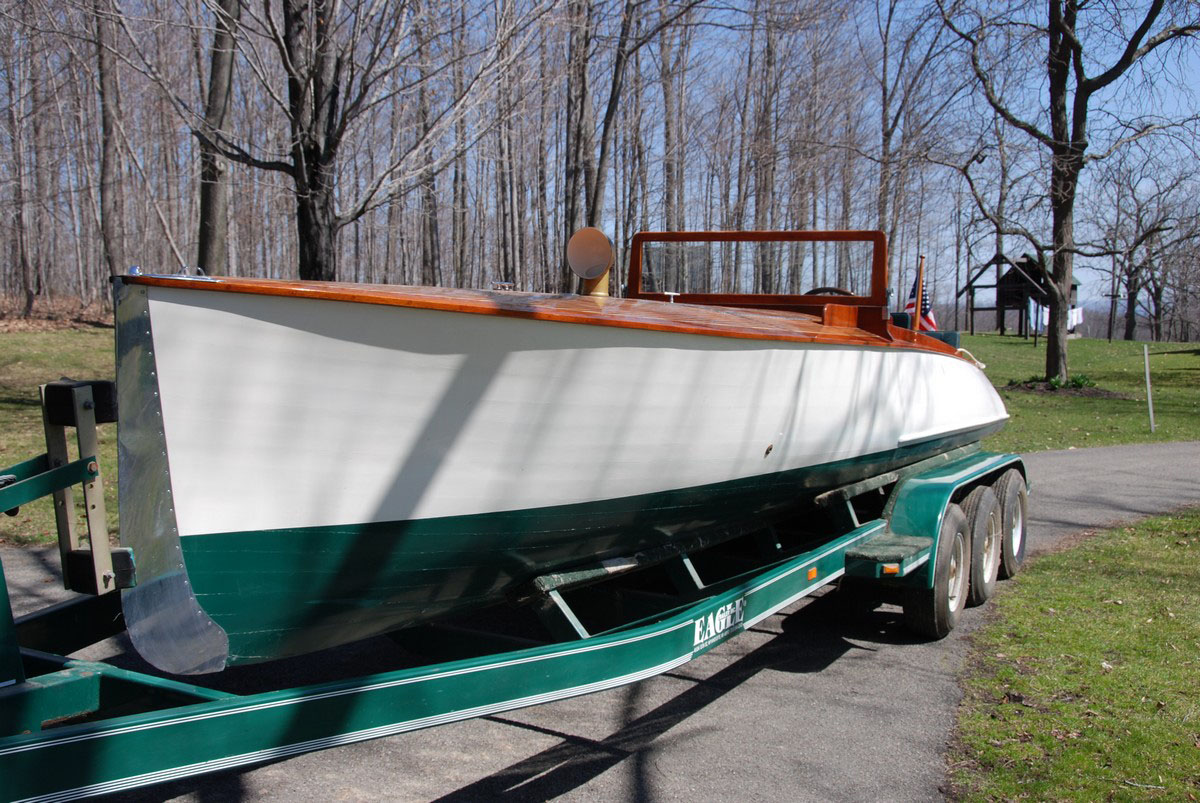 Fay & Bowen built a total of 875 boats between 1900 and 1929. The most popular of these were the 30 Foot Golden Arrows and the 27 Foot Long Deck Launches. The owner feels that he has the nicest long deck on the market and the nicest traditional mahogany decked "painted" cedar hull, long deck available. Offered with the boat is a first class restoration, a full waterline cover, wicker chairs and a custom tri-axle trailer. Powered by a smooth running Gray marine engine, these boats are rare, collectible and this one is ready for a new home. Offers are encouraged. 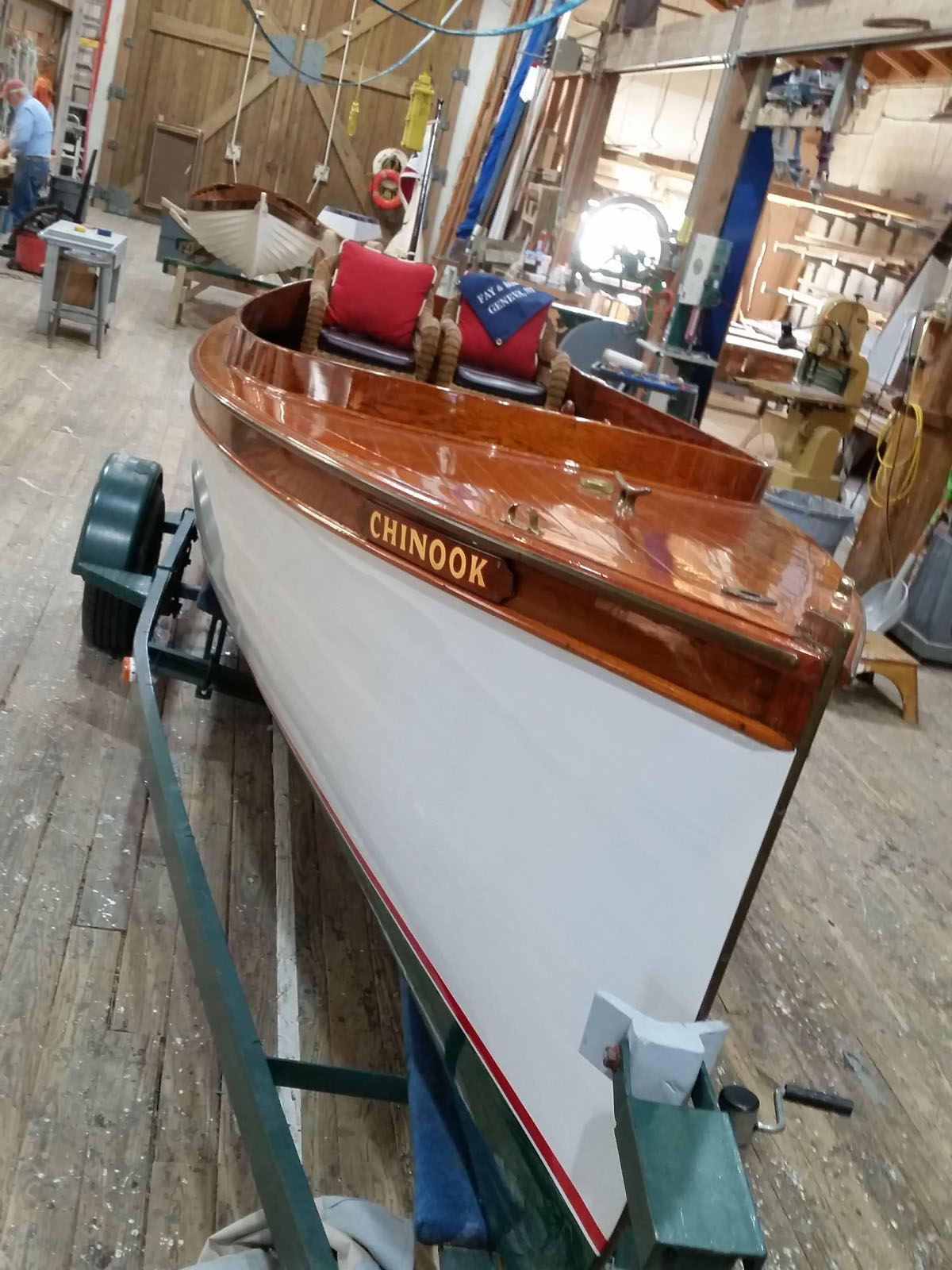 Considered to be the pinnacle of class boat styling, this Fay & Bowen Special features a double end torpedo stern. It is a very distinctive shape with brass fittings. Only 900 of these boats were built and prior to the stock market crash which closed the company. The boat has had new decks and combings installed and has been varnished, painted and carefully cared for by Jim Moore's of Moore's Marine. This is hull 476 and is indeed a very collectible boat.

This 26 Foot Special Wide Launch is one of the finest examples of a restored Fay & Bowen. All of the hardware is triple, plated brass including the shaft, strut, rudder, prop and exhaust. The original engine was removed long ago and replaced with a 45 HP Gray Marine 4 cylinder phaeton engine, which was totally rebuilt. Because of the weight reduction the boat now rides a little higher and dryer. The original gas tank was replaced with a new aluminum tank. The boat has 17 coats of varnish which completes the look.

This Fay & Bowen has had the same owner since 1980 repowerd in 1994 very few hours. alway maintained stored in doors.

At 40 feet in length, this is the largest Fay & Bowen launch that we have ever seen! Built by the Fay & Bowen Boat and Engine company in 1921, her originality has been well preserved and she is an impressive craft. Powered by an original Hall Scott LM6 engine with exposed valvetrain. These engines are extremely rare and this example is a museum-quality piece.

Purchased from Lake George in 1994 and brought to the fresh water lakes of Muskoka where it has been lovingly carded for the last 20 years. Multiple Boat Show award winner and in overall very good condition.

Very nice original Launch. It went through a full restoration in 1989 and has been exceptional taken care of since. Comes with 2 Wicker chairs. Engine went through full rebuild in 2009. This is a solid boat and a great piece of history.

AIDA II, one of the most photographed and documented launches of the pre-1920 era, was built by the Fay & Bowen Engine Company in Geneva, New York in 1907 and originally shipped to nearby Tupper Lake. AIDA II is a 25-foot “torpedo stern family launch” boat, one of a few hundred the company built between 1905 and 1920. In 2005, it under went a total restoration. Well over 1000 man hours have gone into bringing it to “as new” condition. While the hull and most of the seating is original, many of the ribs have been replaced and the decks replanked with a combination of white oak and mahogany, as originally had been done in 1907. The majority of the hardware is original to the boat. Custom built trailer and canopy are included.

One of the finest examples of the Finger Lakes builder. This is the very rare and sought after "Golden Arrow" with only 6 ever produced. This boat is in Concours Condition with virtually no flaws and has been featured in magazines and books before marvelling at her stylish lines. It is most remembered in the book Wood Through water being shown in all of her glory on page 45 and 51. The boat was for many years owned by the Lewis Family in the Thousand Islands area who were generous benefactors to the Antique Boat Museum. The boat is also being offered with a Fay & Bowen LN43 which is a 50 HP motor which was the correct motor for the boat when it was first delivered along with the 1949 Chris Craft Model K gas engine offering 95HP. . The boat has been carefully restored and well cared for during the current owners stewardship. This Golden Arrow has a lovely Interlux Blue Hull which was repainted in 2012. It is built of Cypress planks on oak frames. The decking is Mahogany and is varnished each season.

A gorgeous and very rare Fay & Bowen Launch with a a torpedo stern. This boat is pristine condition, circa 1905. Rare and collectible Fay & Bowen 26' family launch. Recently restored in Muskoka to her original glory. Has won awards at virtually every show she has attended since restoration.

This is an excellent example of Finger Lakes builder Fay & Bowen. Bearing Hull # 588 it is very original and in great shape. The decks are new, but it is believed that the rest of the boat is all original including the bottom. It has the original Fay & Bowen model LC-41 engine which has 27 HP and will move the boat along smoothly. The engine has been rebuilt and is richly detailed and in show condition. The boat needs some very minor cosmetic work but the chrome is all excellent as is the interior and the guages.