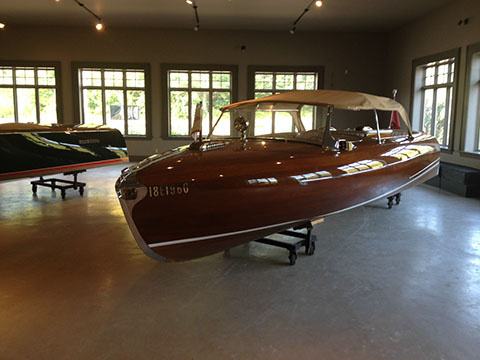 Designed by Douglas Van Patten and built by Greavette Boats of Gravenhurst, ON, the Streamliner was an attractive and quick hard-chined planing design; a blend of modern bottom design and traditional styling. This 22 footer was custom ordered with the curved windshield and soft top option, which is believed to have only been used on 4 boats. Many Streamliners were equipped with an S-Cockpit design with a 2/3 front bench seat, while this example was fitted with a split front seat with a walkthrough, which is quite versatile. The current owner purchased the boat around 2006 and had the varnish refreshed as well as new interior upholstery and chrome. The original Buchanan engine ran well and the boat has been in inside storage for the last 8 years. The traditional bottom still appears to be in fair condition with some time left on the clock before requiring attention. Kept in the Muskoka region for her entire life. 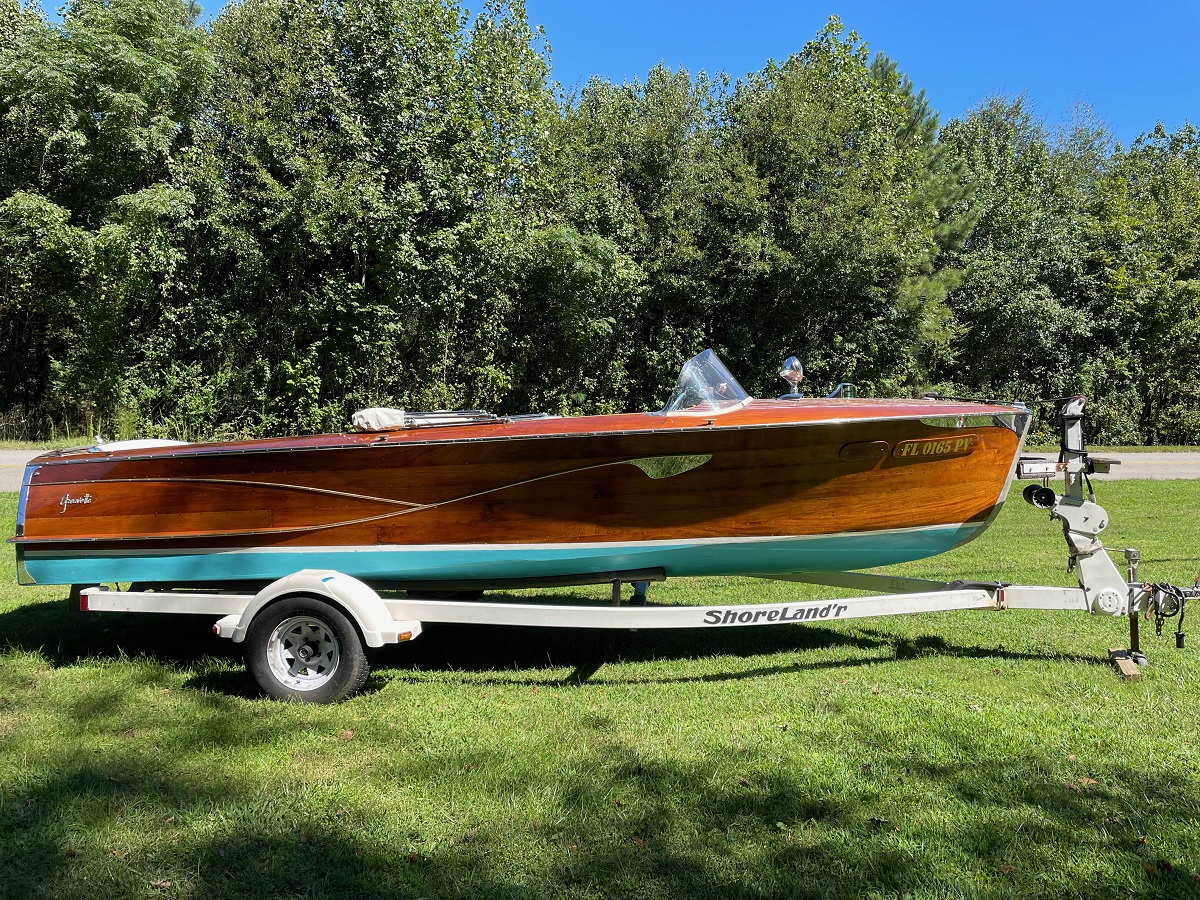 A Canadian classic, this 1957 Greavette Deluxe Utility features a "no-soak" bottom and a complete cosmetic renewal in the past few months. She was stripped and re-varnished, her floor and sidewalls cleaned and her upholstery replaced in a close-match to her original 2-tine dove blue and cream interior. Her 135 HP Buchanan engine (with a closed-loop cooling system) has a re-built carburator, new points/condenser/sparks/wires, and a new battery. She sports port-side steering, all period-style gauges, a cool, raked transom and art-deco inspired hardware. Bimini top and nicely fitted trailer included.

A spectacular example of the craftsmanship by Greavette Boatworks of Muskoka, Ontario; this "Special" 21.5 ' Runabout was built for Col. Moody, Vice President of Greavette Boats in 1936. She was one of only 6 hulls produced in this length. The uniqueness of this particular boat was that it was the only example with covered decks from the rear seat aft and was given "fancy upgrade" consisting of a custom windshield, steering wheel, instrument cluster and hardware. This rendition was named a "Custom", whereas all of the others were "Utility" hulls with an open rear cockpit and a motor box and standard hardware, basic instrument gauges and steering wheel. The boat was originally named "Rob Roy" after the Moody's two sons, Rob and Roy. Mr. Bruce Wilson, subsequent owner of Greavette Boats, acquired Rob Roy in the 1960's, replaced the original bottom and re-powered the boat with the current Chevrolet "327"cu.in. V8 engine. Rob Roy was purchased by Mr. R.E. McDermott, Port Carling ,ON , where it was boat housed at his summer cottage near Mortimer's Point, ON. The boat has been under the stewardship of her current owner since July of 1978. She was comprehensively restored in 1982-1983 with new decks, engine hatches, interior, dash, upholstery, floors, wiring, gauges, complete varnish and re-chrome and the boat was re-named "AliCat" after his daughter "Ali" and wife "Cathy". During the Fall of 2016 the "AliCat" underwent a refresh where she received a complete new transom and re-varnish of the decks and sides. She is in exceptional condition today and perfect example of a collectable, Canadian built classic! 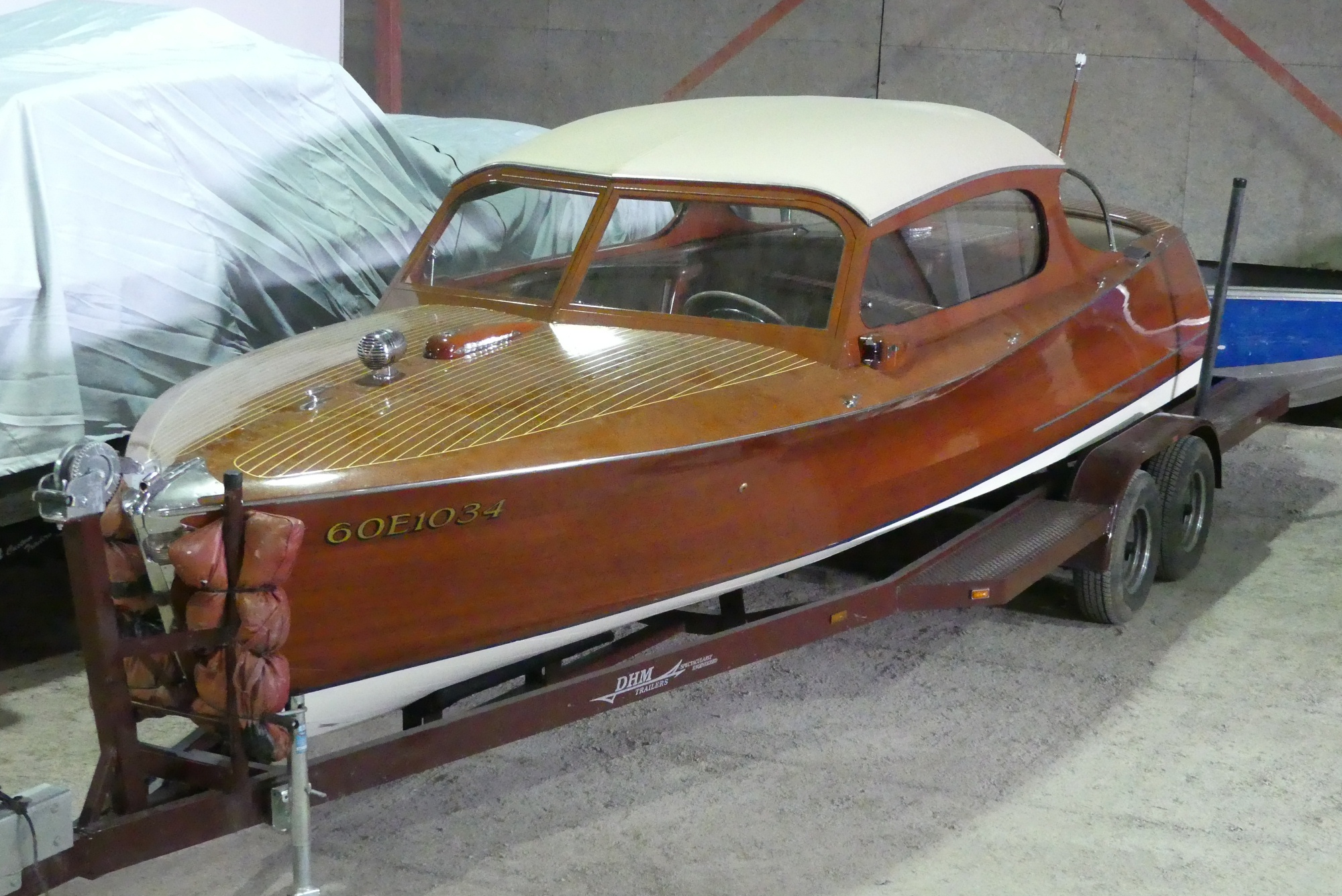 This beautiful Greavette Sheerliner is a true survivor. Sedan configuration is original and very rare. The boat went through a bottom up restoration in 2014. The bottom was replaced with a no soak 5200 style bottom. The boat went through a complete refinish. Any bad wood at that time was replaced. All the interior, chrome, wiring, gauges and more were redone at that time. The Scripps engine was rebuilt by a well known Scripps engine rebuilder. The boat comes with a 3/4 seat in front of the engine box for extra seating. The boat is in immaculate condition at present and could be used or shown. Boat comes on a tandem axle trailer.

One of Greavette's most iconic models, the Streamliner was produced in limited numbers from the late 1930's until the early 1960's. Designed by Doug Van Patten, the model featured stunning curvature, elaborate exposed framework, and traditional Muskoka egg crate flooring. This 1955 double cockpit model has been nicely restored and well maintained. The bottom was replaced in 2015 and a detailed list of restoration and maintenance history is available. The boat was repowered in 2018, with an inter-cooled 5.7 litre fuel injected Mercruiser horizon engine that only has about 2 hours of use and is under warranty until October 2019. The boat also includes a new tandem axle galvanized trailer. This Streamliner is in excellent condition and ready to enjoy this season!

The iconic and beautiful, Canadian-built Greavette Streamliner. One of the most collectable Canadian classics and regarded for its grace and unique design. Elegant craftsmanship and beautiful lines; this 1956 24 foot model was comprehensively restored in 1995 and very well maintained since. She was repowered at the time of restoration with a new Crusader V8 engine for performance and reliability. Desirable S-cockpit configuration allows for an easy pass-through between cockpit areas. A recent custom canvas cover is also included!

An iconic Canadian design, developed in Muskoka, ON. Disappearing Propeller (Dispro) boats are unique in their ability to navigate shallow waters with ease and confidence. Fully restored over a 2-year period. Engine was nicely restored in 2017 by Hewitt Marine. The boat has a new keel and stem, a few 1/2 ribs and both garboards. It has the original seat cushions, and non-original spoon oars. Sold with a small custom trailer.

This gorgeous example of a Greavette has the popular mid engine walk around and is a great user boat. Bottom has been redone and is ready to go. Includes custom tandem axle trailer.

Built by Greavette Boatworks of Gravenhurst in 1949, this Sheerliner Sedan model is absolutely gorgeous! Only 20 hours of use since here comprehensive restoration. New 5200, no-soak bottom, beautiful brightwork and refreshed chrome throughout. Unlike many other sedans, this boat features a hard-chine, planing bottom design which means she will get up and go! The perfect cruising boat, and quick enough to get you back to the dock when the wind kicks up. She has been repowered with a 350cid Mercruiser engine w/velvet drive transmission. Complete with hand-knotted rope fenders to match the original-look.

Boat re-powered as above in 2000 including 2 new gas tanks. Hull restored by Classic Restoration in Orillia Ont 2012.Kept in boathouse since new. This Executive is a head turner and show worthy and has great performance I have owned this boat for 32 years and it is fast reliable rough water transportation in great style. Health reasons are forcing me to sell the Greavette.

Built specifiucally for the current owner's Father in 1976 this is Greavette's final production with only six of these Executives ever built. This is the last Executive motor launch ever built. She has been well maintained by a well known local restorer and is in good overall condition. Boathouse kept in Muskoka its entire life. Equipped with a convertible top, 225hp Mercury Marine engine. White oak keel and bottom frames, 1/4" mahogany ply inner bottom, 1/2" cedar outer layer. Sides and deck are planked in 5/8" African mahogany.

Excellent condition and very original - including original interior and varnish! Partial bottom replacement completed by current owner and the boat has been very well kept. This year of Sunflash had a solid mahogany planked hull rather than the later versions sheathed in plywood. Very sharp, contemporary styled runabout that performs well with a 140hp Mercruiser inboard/outboard powerplant.

This is a very rare length of Streamliner that is absolutely stunning! She has been meticulously maintained and always boathouse kept. The boat was completely restored in 1989, revarnished in 1995, and received an engine rebuild in 2004. She has always been used gently and remains in impeccable condition.

This boat is one of the very rare and sought after 24 foot Greavette Streamliner. This popular streamliner was built from 1937-38 and was characterized by its unusual exterior chrome cut water and hull side rub rails. Very unusual is that the running lights are built into the hull of the boat. Lots of room thereby increasing its functionality and sociability. Greavette's were known for such unique features as the rounded, non pounding hull, fireproof and explosion proof compartments and sound insulated bulk heads. Greavette made only 24 of this particular model and very few are believed to still exist. This boat was in the water last season and could be used again this season in the water. It shows well and is in fully restored condition. It has always been used in the cool fresh water of the Muskoka lakes.

Current owner has had this boat for nearly 30 years. The bottom was removed and the stringers & frames were replaced. Original planking was reused. Transom and aft deck were replaced, original forward decks. New gunwales. Upholstery needs to be done and the boat needs a hefty cosmetic restoration. She bears hull #1 from 1955. A total of 16 were built in that year, only a handful are left today! Original Buchanan engine was rebuilt with NOS parts. Boat has all of its original hardware!

This is a great Canadian-built Greavette Sunflash. The 160's Mercruiser engine has been rebuilt, has a new impeller, and an upgraded cooling system. The entire boat has been redone and is in nice shape. Custom sunbrella travel cover, convertible top. Interior is in great shape. This boat is ready to go and is a fine example. New price - December 2010!!

This is a very rare triple cockpit. Unlike the more common "S" cockpit, this boat features a hatch over the rear cockpit. Other unique features include the prewar SW instrument panel and the external rudder, which only appeared on prewar Streamliners. It was likely commissioned before the War but was registered in 1947. This boat has just undergone a 2 year "frame out" restoration, complete new bottom bottom,Hullsides,and an entire new deck planked properly without any visible bungs. The hardware is original and complete which is essential to a boat this rare. Unique are the 2 fuel tanks that are on each side of the engine. Included is the original Buchanon Flathead 6 cylinder, but the boat is currently powered by a Big block V8, freshly rebuilt and detailed. Streamliners are among the most collectable runabouts on the market, custom built for the most part. If you are in the market for something rare and unique that stands above the rest, this is the Streamliner for you.